Coin Outlet is proud to be mentioned in this article on Coin Telegraph. As of recently our CEO has been spreading bitcoin adoption in Greece. As you can read in this article his efforts are not unnoticed. He will continue to spread bitcoin adoption then return home to the US. More updates on Eric’s trip, and Coin Outlet’s future plans. Let us know what you think about the current crisis in Greece.

On July 15, the birthplace of democracy descended into Molotov cocktails, teargas and violent thugs riding motorcycles and swinging billy clubs on behalf of Greek law enforcement.

Coin Outlet’s CEO Eric Grill stood in the middle of it, along with the quickly forming nucleus of a Greek Bitcoin movement. They hawked what must now seem like an interesting proposition to the average Greek: a currency not dependent on the government or banks.

The initial hurdle of getting the public at large to adopt bitcoin is their fear that it won’t be worth anything in a year, or even a month. Most of the readers of CoinTelegraph can quickly list off reasons why that is absurd, but those reasons aren’t immediately apparent to the average curious on-looker.

For the Greek citizen who is locked out of their savings by a now three-week long (and counting) bank holiday, bitcoin’s volatility is a moot point. Even if Bitcoin depreciates in value drastically, something is better than nothing, and nothing is what many Greek people are finding their digital fiat is worth, at least for this month. News is just coming out now that Greeks may get access to their banks as early as Friday, and the question then becomes what do they do with it? Put their wealth back into the bank, bury it, or put it into Bitcoin?

For bitcoin to succeed, it has long been said that it only needs one currency, one major financial institution or one nation to fail. When that happens, suddenly in the debate over what users choose between — the convenience of a bank relationship or the security of a cryptocurrency — the pendulum begins to swing the other way.

You may know Eric Grill as the CEO of Coin Outlet, but he is just the most visible of the team there. There is also Thanos, who runs Greece’s biggest bitcoin exchange BTCGreece. Dimos Chatzinikolaou (Greek name Δημοσθένης Χατζηνικολάου) is a contributor to bitcoin-gr.org and  is the founder of works forspartanroute.com. Stavros runs a startup incubator called the Cube, and then there’s Felix Weis, whom you may recognize as “the bitcoin traveller” from his on-going bitcoin-funded trip around the world.

Grill and Weis will be leaving sooner rather than later, and then it will be up to Stavros, Thanos and Dimos, the native Greeks, to continue the mission and guide their countrymen to the digital promised land.

The group is at ground zero of the protest. That is no exaggeration. Grill was teargassed in Syntagma Square. That was the police’s somewhat understandable response to having Molotov cocktails thrown at them by someone standing on the protesters’ side. The retaliatory tear gas couldn’t affect the gas-mask-wearing provocateurs however, so the authorities’ response likely didn’t affect the people who actually threw the explosive devices. The regular protesters left, but those who were armed with gas masks stayed and continued to hurl rocks and explosives until the police moved in with more forceful measures.

The tear gas did affect the nonviolent people on the ground though. Grill said his throat still hurt in the morning. He, like many others, streamed some of the protest through Periscope. He was right in the thick of it. A protester asked him in a not-so-polite way to stop filming because they were concerned that the Molotov Cocktail throwers’ identities would be revealed. Minutes after he ended the broadcast, while talking to a Norwegian news station, rocks started flying and it was not long before the events that you have undoubtedly heard about on the news kicked off, both in Syntagma Square and elsewhere in smaller protests.

This protest showed what the Greek people thought about the bailout proposal, but if the Greek government wanted to listen to them, they didn’t show any ability to. Parliament approved the EU-sponsored deal and while more steps have to be taken before Greece gets its billions in borrowed cash and the banks are unfrozen, things do seem to be moving forward. The Wednesday protest was organized by the Unions. While things are quiet in Athens as I write this, everyone is expecting more protests Thursday night, potentially larger and more violent.

For their part, the group doesn’t want to get involved with the political situation. Grill told me that he is “not here as ‘CEO of Coin Outlet’” but is instead focused on building the bitcoin community in Greece and showing them that they have options to store their wealth other than burying euros in their backyard or handing it over to banks that may or may not exist in a year. While he thinks Bitcoin can be a solution to at least some of their woes on an individual level, politically he knows this isn’t his fight and he doesn’t want to get involved. It is “Greece’s problem for Greek people to solve,” he said. 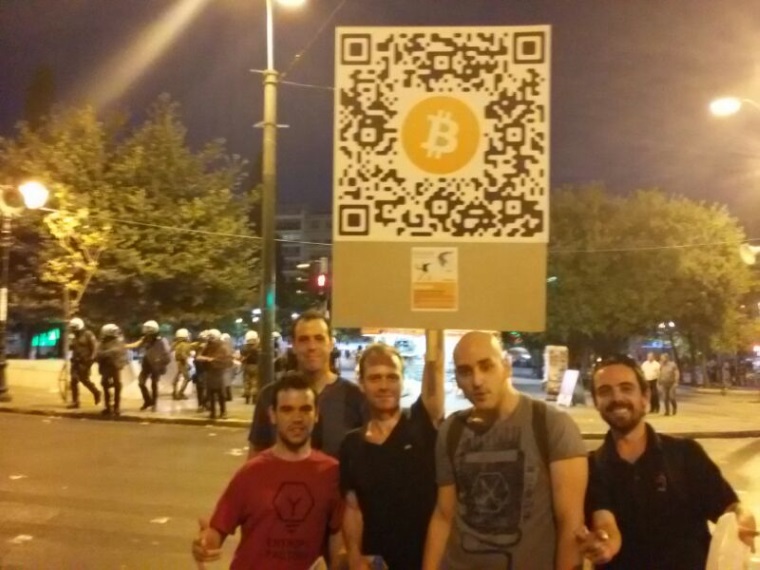 The group is walking among protesters, but they are not participating in the protest itself. Rather, they are focused solely on education. Grill says people and businesses seem interested, and he is certain the group is making an impact. As evident in the photos, they are carrying around a huge QR code, which pulls double duty as an advertisement and a funding method. Any donations sent to it will go to the newly formed bitcoin coalition.

The theory mentioned earlier, about Bitcoin only needing one economy to collapse in order to succeed, is only half true. It also needs infrastructure in that country and it needs people to build and support that infrastructure. I’m sure Bitcoin could offer a lot to the North Koreans as well, but there is no one building such an infrastructure in that country. Greece’s Bitcoin community was virtually nonexistent just weeks ago. Andreas Antonopoulos said as much in a recent podcast, but the situation is rapidly changing. Weis saw the change firsthand.

“[In Athens today] there was just so much more bitcoin activity. [Four months ago] I just met with a couple local bitcoiners. Now, there are regular meetups, two way ATMs and Interest is through the roof.”

Without that growth, any gains in bitcoin’s price from a Greece governmental or economic failure will be made purely of speculative wishful thinking, rather than reality. New technology can only be disruptive if people can get their hands on it, and getting their digital mitts on some bitcoin remains the biggest hurdle facing the average person looking to get into bitcoin, especially in a country like Greece.

And so that is why the newly formed “Athens Bitcoin Group,” as it has been tentatively called, is out on the streets trying to educate people. They are signing up businesses and giving them Android devices. They brought over 600 flyers to the protests yesterday and handed out nearly all of them directly to the people most angry about the government’s financial situation. 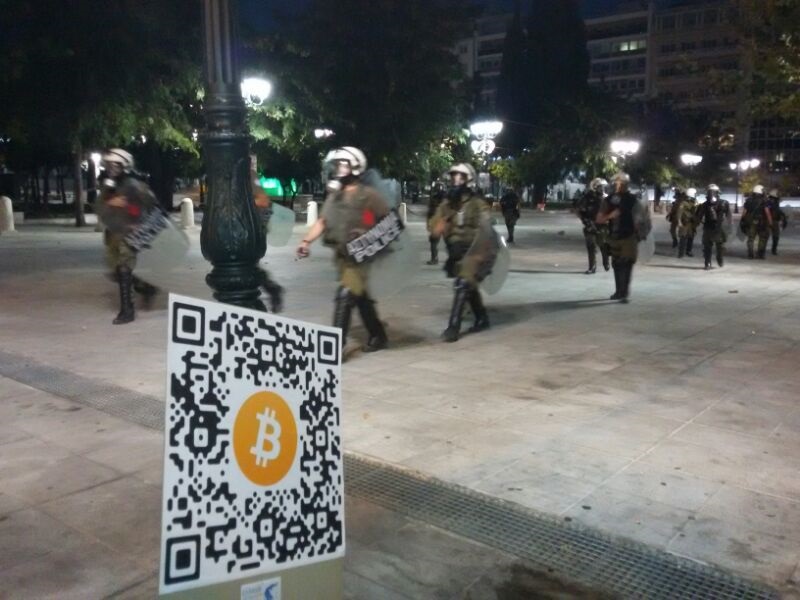 While Grill will soon be returning to the United States (although he plans to return to Greece and use it as a jumping off point for Coin Outlet), and Weis will be continuing on his around-the-world trip (next stop, Israel), more will be staying behind to establish a presence in Athens. The group is larger than its leadership, and helping any interested Greeks move their wealth out of the fiat system.

They are taking residence in what is called the “cube,” a startup incubator that Dimos described to me as “nine floors of pure innovation and creativity.” The owner, Stavros, seems very bullish on blockchain technology and has, temporarily at least, three bitcoin ATMs there. At least one will stay permanently, or until the authorities kindly ask that it be removed. Grill is working with the tax authorities to establish Coin Outlet in Greece, but that may be a way off yet.

I asked Grill if he thought Bitcoin really shined in areas of great strife:

“I definitely think Bitcoin shines in instability and turmoil, […] [The Greek people] are taking money out of the traditional ATMs because they don’t trust their government and they certainly don’t trust the banks.”

Some in the bitcoin community may be turned off by the idea of a central trade group like the Athens Bitcoin Coalition. The Bitcoin Foundation, after all, is arguably one of the most unpopular organizations in the community, at least among a certain subset of users. Those fears are misplaced, however.

Greece, as mentioned, has had very little built up as far as Bitcoin infrastructure. It needs an organization like this if Bitcoin is to take off there. Bitcoin users love decentralization, but people who are used to centralized systems need a reliable place to find information. It would be nice if there were five or ten or a hundred places for the curious to turn to, but that isn’t the case. With the formation of the Athens Bitcoin group, Greece now has one such organization, and it would behoove the Bitcoin community at large to support them.

The birthplace of democracy may be on fire, and the authorities there may be turning a deaf ear towards their people, but from those ashes, a new opportunity is rising. It isn’t enough to simply have a country go through turmoil for Bitcoin to become successful. Someone has to do the leg work, and finally someone is. Dimos described it like this:

“We are here to help all the people who want to learn and educate themselves about the incredible technology of the blockchain.”

When I visited Greece over a decade ago, a merchant who was trying to sell me traditional Greek garb gave me a drachma penny equivalent. He told me to hold on to it, because the money I had in my pocket at the time, the euro, was fake and wouldn’t last in Greece. I chalked it up as conspiracy talk due to a mix of nationalism and nostalgia, but maybe he saw something the economists at the time didn’t. Maybe he saw the writing on the wall long before the pundits. A return to the drachma as the national currency probably isn’t how this crisis will end. But what that memory says to me, anecdotal as it is, is that some Greeks have been looking for an alternative to the euro for a long time.

Perhaps the Bitcoin coalition in Greece can finally provide that.

Eric Grill can be followed on Twitter, where he has been Periscoping the protests. His company’s site iscoinoutletatm.com. Dimos’ Greek language articles can be found on bitcoin-gr.org and he works for Spartan Route a Bitcoin start up. Thanos can be found at btcgreece.com, which allows Greek citizens to buy and sell bitcoin. Felix Weis’ bitcoin traveler blog can be found here. Stavros runs the Cube, which can be found atthecube.gr and in a physical location in Athens where you might just find a Bitcoin ATM. Anyone wanting to donate their old Android devices to help merchants adopt bitcoin are recommended to either contact Stavros at the Cube or Eric Grill at Coin Outlet.